Learn more about MEDIKO's recognition from the Virginia State Senate

Nurse Recruitment: How MEDIKO has Adjusted to the New Normal

It’s no secret the healthcare industry has faced challenges in the last few years and continues to face these same challenges that have re-shaped healthcare altogether. One of those challenges being the increased demand for nursing staff. Supply and demand are in play, causing a national nursing shortage, this shortage increased by the COVID-19 pandemic. Not only have the costs for medical services and products risen, but nursing salaries have as well, to the tune of as much as 25-35%.

So, what does this mean for recruiting? Recruiting for correctional facilities brings its own pre-pandemic challenges, so to add in the re-shaped healthcare landscape of salary rates, flexibility, and the already-existing competition with hospitals and urgent care centers, it takes creativity to navigate the current circumstances.

MEDIKO has made an intentional effort to adjust to the changing market in the industry, helping to remain competitive in recruitment and retaining top talent. MEDIKO leadership has used platforms such as Indeed and Salary.com to conduct the research needed to know what the going rate in each area is, while also comparing the national rate and closest metropolitan areas within 45 minutes of the facility. Since the market research has been done, salaries have been adjusted, while also implementing more and higher-based sign-on and retention bonuses.

In addition to increased salaries, MEDIKO makes sure to offer a thorough benefits package to all eligible employees, including 401k options and paid time off. Most notably, MEDIKO continues to keep the employee’s portion of health insurance at a minimum by absorbing most, if not all, of the plan increase.

Just as desk jobs moved to work-from-home or a hybrid schedule during COVID-19, employees in all professions started to rethink how they work and schedule themselves. Pre-pandemic it was easier to hire nurses for eight-hour shifts and PRN. Today, nurses generally want to work 12-hour shifts, allowing for more flexibility in their week. Offering flexible shift options is another adjustment MEDIKO has made to fill the gap in the nursing shortage.

“These changes are definitely permanent,” says MEDIKO Controller Candice Hansley, CPA. “Every time I research salaries, the average goes up a little bit, so it seems to be continuing. The pandemic caused a very competitive market, pressing employers to match rates. If not, nurses move on.”

MEDIKO CEO Dr. Kaveh Ofogh and Vice President of Partnership Development Jennifer Stradtman had the privilege of attending the Greater Memphis Chamber of Commerce Annual Chairman's Luncheon held on December 13 at the Peabody Hotel. MEDIKO Locally Owned Small Business partners Dr. Terri and Mr. Ken Carpenter of Carpenter Primary Healthcare were in attendance, along with more than one thousand Memphis business leaders, honoring Chamber of Commerce President and CEO Beverly Robertson as she passes the baton to Ted Townsend. 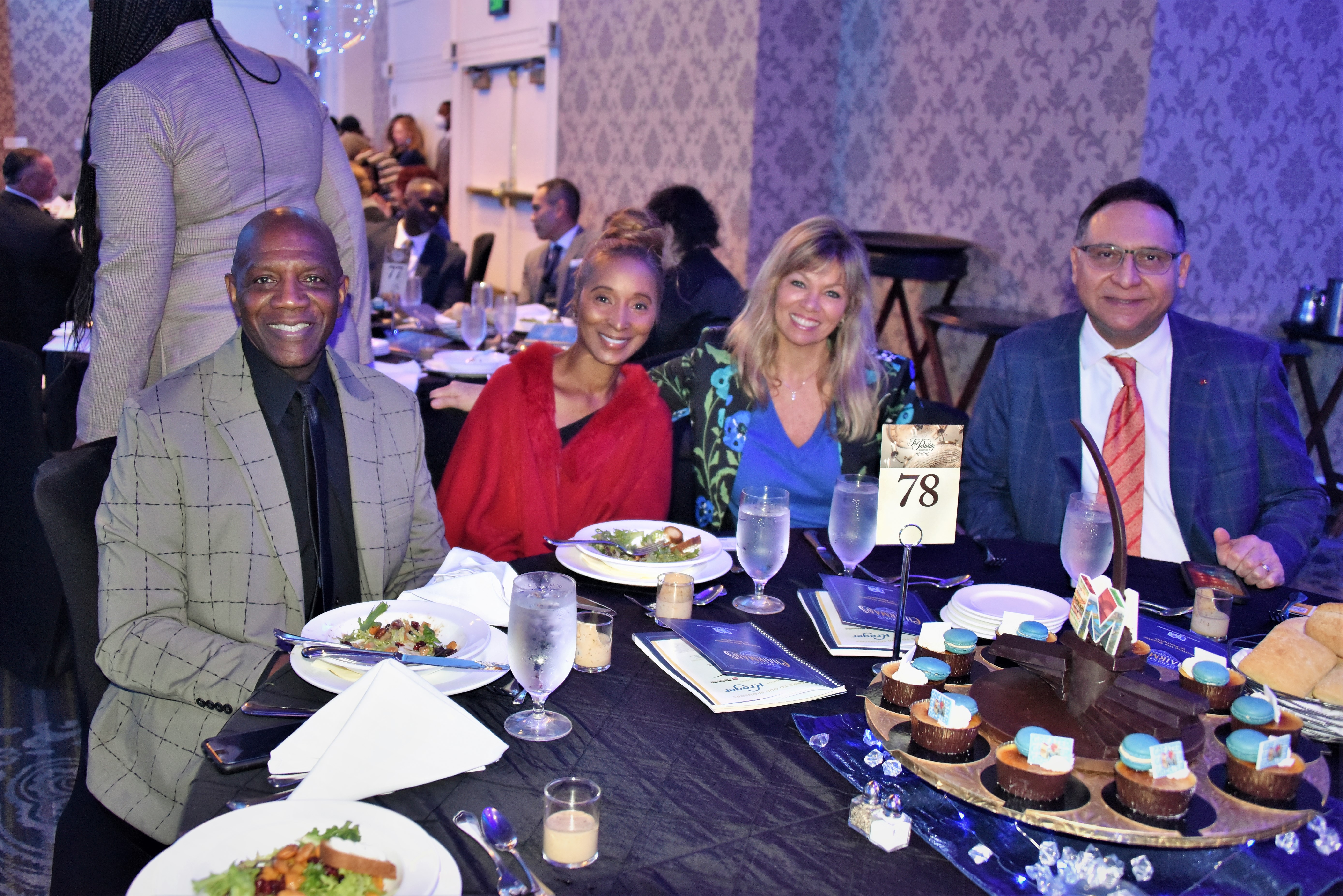 It is estimated that approximately 20% of incarcerated individuals in the United States have mental illnesses, and over the past 50 years, it has become apparent that jails are the new asylums.

When a new officer initially starts working in corrections, he or she may think it is simply a matter of interacting with men and women charged with and possibly convicted of crimes.  It often comes as a surprise to new recruits the number of inmates who are diagnosed with (or suspected to have) mental illnesses.  It is estimated that approximately 20% of incarcerated individuals in the United States have mental illnesses, and over the past 50 years, it has become apparent that jails have become the new asylums.  But how did this come to be?

During his tour, Stein was briefed on the jail’s ‘MAT' program. The “Medication-Assisted Treatment” program is an effort to help detainees recover from opioid addiction.

“I really believe that Buncombe County can really be a model to other counties across the state,” Stein said. “It’s all about attacking the crisis of the opioid epidemic."

The attorney general’s tour follows on the heels of his opioid agreement announcement. The $26 billion settlement with three of the nation’s major opioid distributors and one manufacturer will be split between local and state governments across the United States. According to the Department of Justice, North Carolina will receive $750 million.

“We know that Buncombe County is going to have about $18 million over the 18 years and they’ll decide for themselves what are the most effective strategies to deploy,” Stein said. “[The money] can go to things like treatment facilities, detox facilities, recovery support services, harm reduction strategies that keep people alive until they’re ready to get the treatment they need to get healthy.”

Stein, who was impressed with the MAT program, is hopeful other North Carolina counties will utilize funds to implement similar options for inmates.

“There’s still only about 11 or 12 statewide that have [programs like MAT], but it is a movement going in the right direction,” Stein said.

The data reflects a positive trend, according to Sheriff Quentin Miller, but the long-term effects are unquantifiable.

“It’s an opportunity for us to save someone’s life and for me, that’s paramount,” Miller said. “Our percentages of people who are dying and overdosing has dropped, especially who have been inside our detention facility, so I call that a success.”

Lance Karner said he wishes it was around when he needed it.

“I tried getting detox medication when I was in jail, and I couldn’t get any kind of detox I was just detoxing cold turkey,” Karner said. “I’m grateful for where I’m at and the experiences that I had, but there’s no telling that that might have helped me, saved me a couple of years.”

Karner is now a harm reduction coordinator with Buncombe County Health and Human Services’ syringe exchange program. He is using his experiences to educate and connect with others.

“It opens up the door for communication,” Karner said.

According to data from the Buncombe County Sheriff’s Office, over the last two years, 335 new detainees started the MAT program while behind bars.

VIRGINIA BEACH, Va. – COVID-19 is putting on a strain on people living with mental illnesses and this can be an even bigger problem for people who are locked up in jails and prisons.

The Virginia Beach Jail is taking action to better educate their employees on how to identify and spot issues surrounding mental illness, drug overdoses and withdrawals inside their facility.

MEDIKO, a company based out of Richmond recently won… Read more

VIRGINIA BEACH, Va. – COVID-19 has been a big problem for certain jails and prisons around the country. News 3 got an exclusive behind the scenes look at what a Virginia Beach jail is doing to keep the virus away as they’re operating with a new medical service team.

“It certainly changed the way we do business,” said Rocky Holcomb, the Chief Deputy of the Virginia Beach Sheriff’s Office.

He said they thoroughly screen people coming into the jail. Inmates are kept with the same people and interaction has been limited. Chief Deputy said they are constantly cleaning… Read more

Recognize The Signs Before They Die

The death tolls continue to rise due to substance abuse and withdrawal. The environment hit the hardest:
corrections. Because of this epidemic, you need to know the signs and symptoms of withdrawal to protect
yourself and your inmate patents. Death due to substance withdrawal is the most common cause of successful
lawsuits within detention centers in the United States.

A local physician is appalled that several of his patients who are undergoing treatment for drug addiction were refused their withdrawal prescriptions in jail.

The correction industry is in desperate need of an alternative to either Privatization of Medical or the more significantly risky self-management models utilized in the majority of jails and prisons in the United States.

Virginia is using cutting-edge “telemedicine” to allow doctors to look at patients from miles away.

The United States Department of Justice (DOJ) released a scathing letter of finding regarding an investigation on Piedmont Regional Jail’s medical care of inmates over a year ago. And now that a settlement has been reached, the jail is finally seeing the cost for providing sufficient medical care for its inmates. The price tag is a little more than expected.

Methamphetamine has been at the forefront of the drug debate as police make record-setting numbers of lab seizure and prosecutors secure the convictions of meth-trade kingpins. Most areas of the region however face a far bigger drug problem – prescription drug abuse. It’s an issue that gets little attention these days due to the intense focus on stamping out methamphetamine.

Even the best of clinicians find correctional institutions difficult environments in which to work. Inmates frequently have multiple medical, mental health, and substance-abuse issues that are not easily managed by a single provider. Furthermore, the number of correctional patients with coexisting mental health and medical needs is increasing.

The challenge of launching such a complex system would require a seamless orchestration of personnel, equipment, scheduling, and expertise. With 30 years of experience working in correctional facilities and 10 of those years working in the private correctional facilities management industry, Noble was the right man for the job. Yet, despite his extensive experience and comfort with health care models, Noble and the transition team wanted to do things differently, more effectively, and less expensively than the existing models allowed.

Currently, approximately 2.4 million inmates are housed in correctional facilities across the United States. That equates to 1 out of every 110 Americans behind bars on any given day. Incarcerated individuals are the only segment of the U.S. population with a constitution right to receive adequate physical and mental health care. Still, one of the most heavily scrutinized aspects of a correctional facility is the cost of its medical department.